Why the Tesla Battery Isn't a Renewable Energy Gamechanger 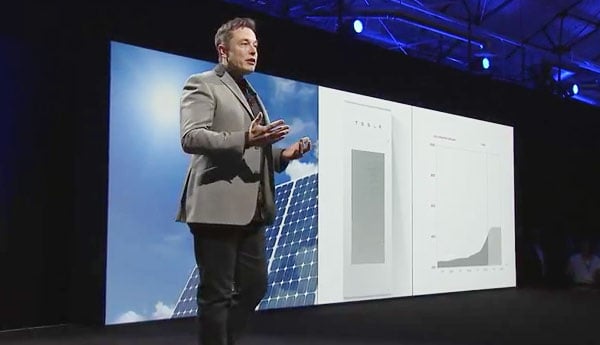 A few months ago, Elon Musk announced that Tesla would be releasing a battery to help solar users store their excess solar energy, giving them access to energy on demand. It's being hailed as revolutionary technology that's going to change the face of renewables. Unfortunately, once you push past the hype, this technology isn't the panacea solution it's being promoted as.

The first reason the battery is problematic is based on simple issues with lithium ion battery technology. Batteries, in general, are very inefficient and costly. When you discharge and charge a battery, you're losing energy. With the Tesla battery, this would result in approximately 20% daily energy loss when it's in use. In addition, Tesla is saying that it would cost 2 cents per kilowatt hour to use the battery to do load shifting and storage.  This is off by at least ten times:  the battery would have to cycle--fully charge and discharge--25,000 times to get to two cents a kWh, meaning it would be closer to 20-30 cents a kWh. This is because lithium ion battery technology can only complete about 1,500 complete cycles total over a battery's lifetime. From this perspective, the battery is both costly and a waste of scarce resources.

Another major issue is that batteries have a short lifespan. Any lithium ion battery, used regularly or not, will be totally dead in ten years (at best).  The $5,000 battery cost is a huge investment for a backup that you'll need to completely replace in under a decade. It's more cost-effective, and better for the environment, to purchase a natural gas or propane backup generator; you will never come close to using up a cylinder of propane in ten years, and the amount of carbon and energy it takes to make that generator is ultimately equal to, or less than, what it takes to make the battery.

We need to rethink how things operate. Renewables need to be, and are going to be, our primary source of energy. But right now, in New England, over 50% of our electricity is powered by natural gas, running 24 hours a day. We should be saving that usable fossil fuel, because that can be stored indefinitely, and only using it when the renewable-powered system needs backup, on those cloudy days with no wind. Many utilities don't see a future that's different, and it's going to have to be different.

Musk is undeniably a great visionary, but in this situation, he's not looking far enough into the future. He's chasing something that's going to change, and feeding into the myth that storage is necessary to make renewables a truly viable option for powering our world in the long-term--and this is simply not true.

The problem we really need to concentrate on is our electric grid, which is outdated and designed around fossil fuel and nuclear central-station power. That system isn't going to work in the era of renewables, our energy sources of the future. We need to force the buildout of an integrated, smart grid, updated and designed for the twenty-first century.

Think of the current grid as a system of one-way streets, going from a central station out to the customer. Our new reality is that renewables are distributed resources that have to connect to this grid everywhere; they have to be integrated into it. With a smart grid, you'll never be throwing electricity away, you'll simply be moving things around and putting it to use in real time. Central station power is a way of the past and waste of energy. We need to make the grid a system of two-way streets, like interstate highways. All we have now are one-way dirt roads.

Ultimately, the battery is the wrong way to go. Spend your $5,000 on putting more solar on your roof or in your yard, or making your home more energy-efficient. Purchase a small fossil-fuel generator to use in the rare event when the grid goes down and you need energy. If you're a solar user and it's available to you, use net metering. This will allow you to put your solar energy into the grid, which is the ultimate efficient battery-- it's established and it will take 100% of your output.

The Tesla battery is great hype for the industry. It's truly great to get people encouraged and excited about the integration of renewables in our daily lives. But at the same time, that excitement is misplaced. Our money, and energy, should be put behind new systems, new technologies, and a smart grid--not a solution to a paradigm that is going to change.

This post originally appeared on the AllEarth Solar Power blog.